Respiratory syncytial virus (RSV) infection is a major cause of respiratory tract infections in infants and young children and remains the leading cause of hospitalization among those less than 1 year of age. On a global scale, it is estimated that 3.4 million infants develop severe RSV disease and that as many as 253,000 children under 5 years of age die from the infection every year. Decades of effort to develop a safe and effective active vaccine have been unsuccessful. Moreover, available treatment modalities are limited to supportive interventions, such as hydration, delivery of supplemental oxygen, and when necessary, invasive mechanical ventilation. Pharmacologic interventions aimed at preventing severe RSV infection using passive immunization have been more successful but, to date, are used only for disease prevention in very high-risk infants. Palivizumab, a humanized RSV monoclonal antibody has been the mainstay for infant RSV prevention among specific high-risk infants for more than two decades. While its efficacy is well established, its relatively short half-life requires that it be administered monthly during periods of exposure. New extended half-life monoclonal antibodies are now showing favourable results in clinical trials. One of these new investigational extended half-life monoclonal antibodies, nirsevimab, has already advanced to phase III clinical trials. The aim of this review is to summarize the characteristics of nirsevimab and describe the promising results from the pivotal phase IIb efficacy trial.

Respiratory syncytial virus (RSV) is a ubiquitous virus that causes annual epidemics of infection in young children in all parts of the world. In temperate regions, epidemics are seasonal, and predictable during the winter months. Approximately half of all infants develop their first RSV infection prior to their first birthday. By 24 months of age, almost all children are infected by RSV.1–4 Re-infection is common throughout life, with the first infection typically being the most severe. The virus causes an upper respiratory tract infection that progresses to lower airway disease in 25–40% of infants and young children.1–4 Young infants who develop lower respiratory tract infections (LRTIs) frequently require hospitalization, as it is not unusual for young infants with RSV bronchiolitis or pneumonia to develop respiratory rates of 80 breaths per minute or higher, hypoxaemia and/or dehydration secondary to an inability to feed.1–3 Rates of infant RSV hospitalization are highest during the first 3 months of life. In the USA and Europe, 1–3% of the birth cohort is hospitalized with RSV each year, while rates in other areas of the world, such as Brazil and Guatemala, reach as high as 5–6%. Hospitalization rates for infants born prematurely are consistently higher.4 The global burden of severe disease is substantial, estimated at 3.4 million infants annually. The aim of this review is to summarize the characteristics of nirsevimab and describe the promising results from the pivotal phase IIb efficacy trial.

Although several clinical trials to test novel treatment modalities are underway,5–8 the current standard of care for the treatment of RSV infection is limited to supportive care.9 While RSV bronchiolitis is a wheezing illness, bronchodilators and glucocorticoids have not been shown to impact the disease course in a clinically meaningful way. Ribavirin, an antiviral medication once used to treat infants hospitalized with RSV infection, is no longer used for the same reason. In the absence of effective therapeutics, any and all efforts at disease prevention become increasingly important.10,11

In the 1960s, the early and first efforts to develop an active RSV vaccine failed miserably when RSV-naïve infants, who received the formalin-inactivated investigational vaccine, experienced severe enhanced RSV disease rather than being protected from infection.12,13 Two of the infants died. Now, more than 50 years later, advances in virology, protein chemistry, immunology and vaccinology have finally led to new and promising active vaccination strategies for study in human trials. While a detailed discussion regarding the progress in investigational active RSV vaccine development is beyond the scope of this review, excellent summaries have been published elsewhere.14–17

The development of an active vaccine for the prevention of infant RSV infection remains a global priority, but the World Health Organization estimates that it will be at least 5–10 years until one or more are approved for routine clinical use.10 In the meantime, RSV disease prevention must be emphasized. Anticipatory guidance to caregivers should include information about the modes and potential sources of transmission, and the seasonal epidemiology of the virus, with an emphasis on good hand hygiene and avoidance of day-care or other prolonged periods of repeated exposure to other children where possible.1,10,18,19 Such education is especially important for the caregivers of the highest-risk infants, such as those born prematurely, those with chronic lung disease and those born with haemodynamically significant heart disease. Compared with term infants, those born prematurely are at higher risk of developing respiratory tract infections, including RSV, due to their highly immature immune systems, suboptimal transfer of maternal transplacental antibodies prior to birth and their smaller, less developed airways.4,10,20–23

Passive immunization has been shown to be highly effective in preventing severe RSV infections in high-risk infants.10 Palivizumab, a humanized monoclonal antibody, is currently the only US Food and Drug Administration (FDA)-approved passive prophylaxis for severe RSV LRTI in certain high-risk children. The product is approved for use among infants born at ≤35 weeks’ gestational age, and children <24 months of age with either haemodynamically significant congenital heart disease or chronic lung disease of prematurity.10,24 The safety and efficacy of palivizumab for prevention of RSV infection in these and other infant populations are well established through randomized, placebo-controlled trials and post-licensure (phase IV) effectiveness studies.24–26

Despite its excellent safety profile and clearly defined efficacy in preventing severe RSV infection in every cohort studied, the use of palivizumab in clinical practice has been generally limited to those at the very highest risk for severe disease.9,27,28 Such groups include only the most extremely premature infants (<29 weeks gestational age) entering their first RSV season and those infants with heart disease or chronic lung disease.29,30 Between 8 and 12% of infants in these highest-risk groups require hospitalization for RSV infection.31 Use of passive prophylaxis outside of these high-risk groups is limited due to a restrictive RSV passive prophylaxis policy guidance from the American Academy of Pediatrics, high cost, and the short half-life of palivizumab requiring monthly dosing to maintain ongoing protective levels.1,11,24

Nirsevimab is a recombinant human monoclonal antibody that targets the pre-fusion conformation of the RSV F-protein by binding to the highly conserved site 0 of the pre-fusion RSV protein. The parent antibody was modified in two ways. The first series of modifications were made across the Fab (fragment, antigen-binding) portion of the antibody to optimize neutralizing activity across a broad range of group A and B RSV isolates. The details of those changes are proprietary. The second series of changes included a three amino acid substitution in the antibody’s Fc (fragment, crystallizable) region, referred to as a YTE modification. Specifically, the native methionine (M) at position 252 was changed to tyrosine (Y), the native serine (S) at position 254 was changed to threonine (T), and the native threonine (T) at position 256 was changed to glutamic acid (E). Such an M252Y/S254T/T256E, or YTE modification, of any immunoglobulin G (IgG)k1 results in a half-life extension from 21–28 days to 87–117 days.32 During the development of nirsevimab, the combined changes were anticipated to result in a highly potent and broad-spectrum RSV-neutralizing activity with an extended half-life. Pharmacodynamic modelling studies suggested that administration of a single, fixed intramuscular dose to infants could provide protection from RSV infection for at least 5 months, the length of a typical RSV season.32,33

After a phase I human clinical trial (ClinicalTrials.gov Identifier: NCT02114268) of nirsevimab in healthy adults demonstrated a comparable safety profile with placebo, the extended half-life monoclonal antibody was given fast-track designation by the FDA.32–34 Results from a single-dose, randomized, placebo-controlled, phase IIb study (ClinicalTrials.gov Identifier: NCT02878330) in preterm infants born at 29–35 weeks’ gestational age (nirsevimab n=969; placebo n=484) demonstrated that the incidence of medically attended RSV LRTI was 70.1% lower with nirsevimab prophylaxis than with placebo, and the incidence of LRTI RSV hospitalization was 78.4% with nirsevimab prophylaxis than placebo.35 Subgroup analyses performed to evaluate relative risk reduction for medically attended LRTI according to the subject’s gender, age at enrolment and gestational age at birth were each in favour of nirsevimab (Table 1). The highest percentage risk reductions were observed among those born between 29 and 32 weeks’ gestational age, and those who were enrolled during their first 3 months of life. Types and rates of adverse events and non-RSV LRTIs were similar between those receiving nirsevimab and those receiving placebo.35,36 Table 2 provides a comparison of the frequency of specific adverse events reported in both placebo and nirsevimab recipients. Currently, nirsevimab is being further evaluated in a randomized, blinded, palivizumab-controlled phase II/III trial among preterm infants and infants with chronic lung disease of prematurity or congenital heart disease (ClinicalTrials.gov Identifier: NCT03959488), and in a phase III, randomized, placebo-controlled trial that includes healthy late-preterm and term infants entering their first RSV season (ClinicalTrials.gov Identifier: NCT03979313).10,37,38 Table 3 provides a summary comparing key characteristics of palivizumab with nirsevimab. 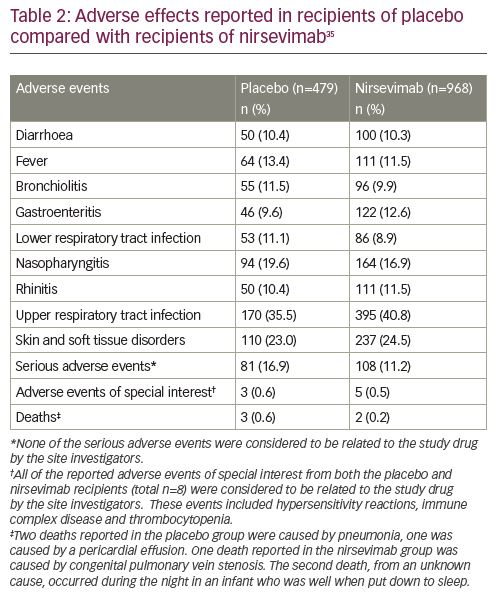 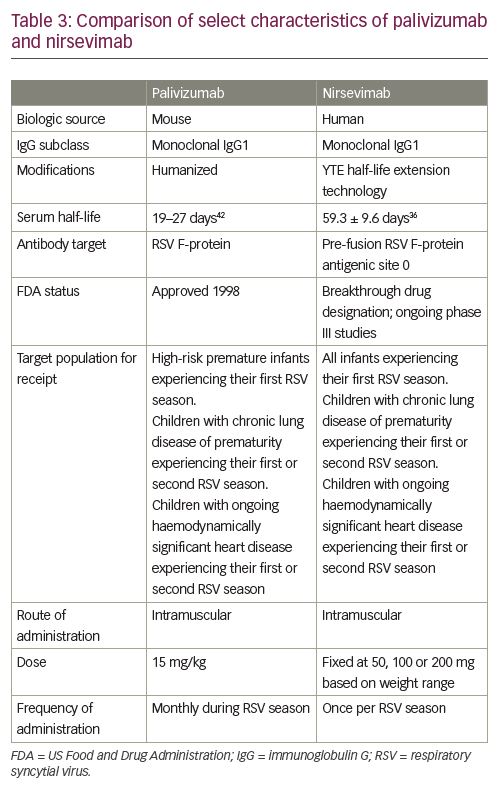 Another investigational, extended half-life, monoclonal anti-F RSV antibody, MK-1654, is also being evaluated in a similarly designed phase II clinical trial (ClinicalTrials.gov Identifier: NCT03524118).39–41 Like nirsevimab, the YTE modifications of the Fc portion of MK-1654 extend its half-life to approximately 70–85 days. Fab modifications of MK-1654 have also been made, but are proprietary.

The published safety and efficacy data for nirsevimab for the prevention of infant RSV infection when administered as a single fixed dose offer the potential to change the landscape of infant RSV disease. To realize its full potential to reduce the morbidity, mortality and misery caused by infant RSV infection on a global scale, cost, production and availability must align with the capacity, need and demand from a broad spectrum of global stakeholders. Such stakeholders include, but are not limited to, the World Health Organization and the public health systems they support; the manufacturer; and the layers of infrastructure needed to distribute, store and deliver the passive immunization to the world’s birth cohort each year.

Joseph B Domachowske has no financial or non-financial relationships or activities to declare in relation to this article.

This study involves a review of the literature and did not involve any studies with human or animal subjects performed by the author.

No funding was received for the publication of this article.

This article is freely accessible at touchRESPIRATORY.com © Touch Medical Media 2021.

Respiratory syncytial virus (RSV) is a ubiquitous virus that causes annual epidemics of infection in young children in all parts of the world. In temperate regions, epidemics are seasonal, and predictable during the winter months. Approximately half of all infants develop their first RSV infection prior to their first birthday. By 24 months of age, […]

Updates in the Guidelines and Treatment of Ventilator-dependent Children

Inducible laryngeal obstruction (ILO), previously designated as vocal cord dysfunction (VCD), is characterised by a transient and reversible narrowing of the larynx in response to external triggers, resulting in symptoms such as cough, dyspnoea and noisy breathing.1,2 Adduction of the vocal folds usually occurs in inhalation but can also happen in exhalation, restricting movement of […]