The hallmark of chronic obstructive pulmonary disease (COPD) is the occurrence of expiratory flow limitation (EFL) during a forced expiratory manoeuvre at higher lung volumes compared with healthy subjects. In some patients with COPD, EFL is present during tidal breathing (tidal EFL), which impairs the ability of patients to exhale and can be more impactful at rest. Several methods have been proposed to detect tidal EFL in patients with COPD, including oesophageal balloon measurement and non-invasive alternatives such as abdominal compression, negative expiratory pressure and the forced oscillations technique (FOT). FOT provides an objective measure of tidal EFL that does not require the subject to perform respiratory manoeuvres and provides a simple, accurate and repeatable approach to investigating the mechanical properties of the respiratory system. Detection of tidal EFL is clinically important but is often under-recognised in the clinical setting. Monitoring tidal EFL has the potential to identify factors limiting exercise tolerance in COPD, as well as to guide or titrate treatment and improve clinical outcomes for these patients.

This article reports the proceedings of a sponsored satellite symposium held at the ERCA-JIVD 3rd Joint International Meeting. As such, it has not been subject to this journal’s usual peer-review process. The report was reviewed for scientific accuracy by the symposium speakers and a member of the editorial board before publication.

All named authors meet the criteria of the International Committee of Medical Journal Editors for authorship for this manuscript, take responsibility for the integrity of the work and have given final approval for the version to be published.

This article is published under the Creative Commons Attribution Noncommercial License, which permits any non-commercial use, distribution, adaptation and reproduction provided the original author(s) and source are given appropriate credit. © The Authors 2018.

Philips Respironics funded the publication of this article through an independent educational grant and were provided the opportunity to review the draft for medical accuracy. Any resulting changes were made at the expert reviewers’ discretion.

The hallmark of chronic obstructive pulmonary disease (COPD) is the occurrence of expiratory flow limitation (EFL) at higher lung volumes during a forced expiratory manoeuvre compared with healthy subjects.1 In some patients with COPD, EFL is present during tidal breathing, a condition known as tidal EFL that restricts the ability of patients to consistently achieve their relaxed end-expiratory lung volume (EELV), even at rest.2,3 This process is a major determinant of dynamic hyperinflation and exercise limitation.4 As the occurrence of EFL during tidal breathing may be a better indicator of dyspnoea than spirometric measurements,5 it can be considered a clinically relevant measurement in the diagnosis and staging of COPD.6 In the past, the measurement of tidal EFL was challenging because it was invasive, time consuming, technically demanding, difficult to standardise because of variations in previous lung volume history, and required bulky equipment and post-test analysis.7,8 This meant that the functional assessment of COPD in clinical practice has been largely restricted to spirometry. The gold-standard method for detecting tidal EFL requires the use of an invasive oesophageal balloon, however several alternative non-invasive methods have now been proposed to measure tidal EFL, including abdominal compression, negative expiratory pressure (NEP) and the forced oscillation technique (FOT).9 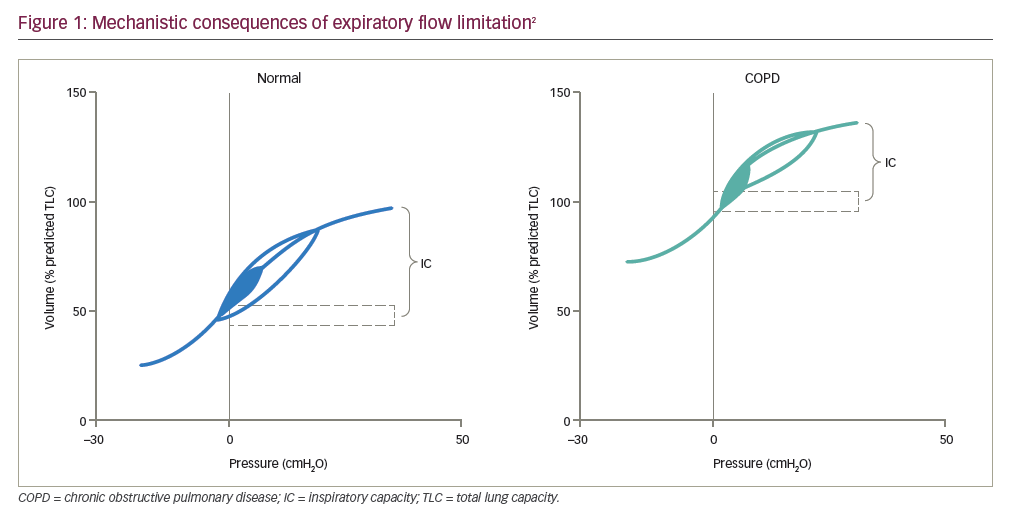 The pathophysiological significance of EFL in COPD, its measurement with non-invasive techniques, and the importance of monitoring EFL in patients with COPD were discussed at a satellite symposium sponsored by Philips Respironics and held at the 3rd Joint International Meeting of the European Respiratory Care Association (ERCA) and Journées Internationales de Ventilation à Domicile (JIVD) in Lyon, France, on 17 March 2018.

What is tidal expiratory flow limitation?

Tidal EFL in COPD arises because of the combined effects of reduced elastic lung recoil and increased airway resistance due to small airway inflammation, which causes a reduction in the luminal cross-sectional area.10,11 This, in turn, results in gas trapping on expiration10,12 and lung hyperinflation, a key mechanistic consequence of tidal EFL (Figure 1).2

In healthy subjects, EELV and inspiratory capacity (IC) are maintained throughout exercise.2 Any changes that occur in EELV as a result of obstructive lung disease are reflected by changes in IC, as total lung capacity (TLC [EELV+IC]) remains unchanged during exercise.2 In COPD, dynamic hyperinflation is the temporary and variable increase in EELV above its baseline value, which is aggravated further as expiratory time shortens, e.g., during exercise, resulting in further increases in EELV.2 Dynamic hyperinflation has been shown to be strongly associated with EFL during exhalation,10 which in mild COPD usually occurs during exercise.13 However, as the condition worsens EFL and dynamic hyperinflation can also be present at rest.13 EFL contributes independently to symptoms during COPD exacerbations (when compared to patients without EFL),14 the most distressing of which is dyspnoea (breathlessness).15 Patients with COPD have described dyspnoea as an unsatisfied inspiratory effort (i.e., they can’t get enough air in), having inspiratory difficulty or experiencing shallow breathing.2 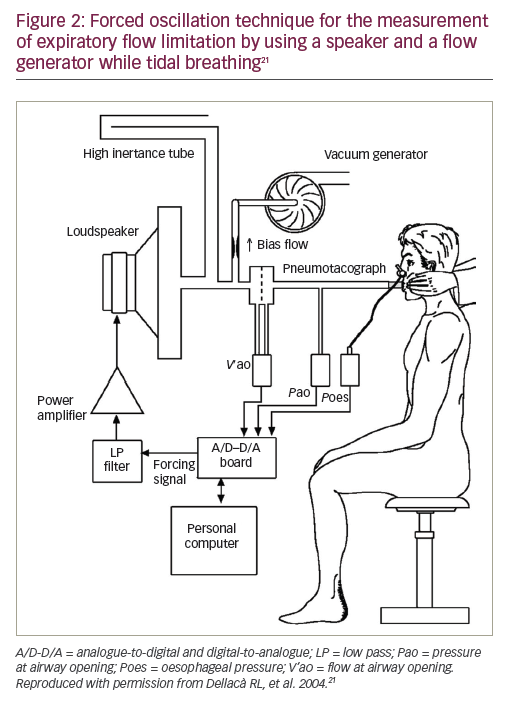 Assessment of small airway function in clinical practice has remained a challenge for many years and progress in this area has been impeded by technical limitations related to the small size of the airways and to their location deep within the thoracic cavity.16 Several methods have been proposed to detect tidal EFL in patients with COPD, including the invasive oesophageal balloon technique, non-invasive abdominal compression, NEP and FOT.9,17,18 The challenges with some of these methods include the impact of patient position on reproducibility, e.g., seated or supine (abdominal compression),19 as well the subjective nature of the assessment (NEP), which has resulted in a reassessment of the utility of FOT.8

DuBois et al. first introduced FOT in 1956 (Figure 2),20 but it is only now gaining clinical recognition. It is an objective measure that does not require the performance of respiratory manoeuvres and offers a simple, detailed and repeatable approach to investigating the mechanical properties of the respiratory system.8,21,22 It has also been shown to be as sensitive as spirometry in detecting impairments of lung function.22 FOT is performed at higher frequencies than regular breathing (typically between 5–25 Hz).23,24 Reactance at 5 Hz during the expiratory phase (using the inspiratory reactance as a baseline) appears to be particularly sensitive to EFL, and this has been used in an effort to assess small airway function in patients with COPD.25,26

FOT can identify EFL when a large difference in within-breath inspiratory and expiratory reactance occurs due to the development of choke points throughout the bronchial tree (Figure 3).8,21 Measuring reactance over multiple breaths is preferable as it retrieves information from a longer time span than breath-by-breath measurements. As a result, aberrations in breathing pattern occurring within an individual breath are averaged over the entire measurement period, and so yield a more accurate measurement.7 Higher values are common in patients with COPD even versus smoking controls, with high values tending to remain consistent over time.7 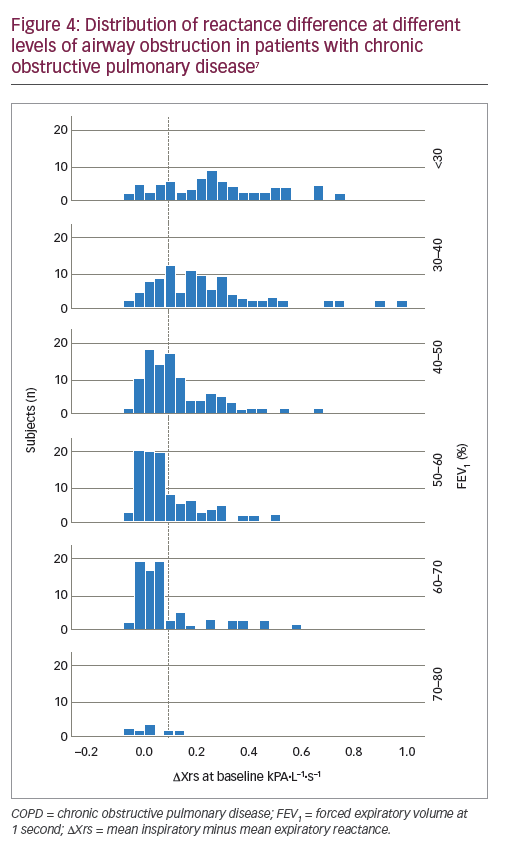 Why is it important to assess expiratory flow limitation in chronic obstructive pulmonary disease?

The presence of EFL during a COPD exacerbation has potential clinical implications, such as signalling the presence of more severe physiological perturbations that are not detectable by spirometry.14 However, EFL is often under-recognised in the clinical setting.27 EFL in patients with COPD is associated with lower forced expiratory volume in 1 second (FEV1) (Figure 4) and greater hyperinflation, as well as a significant correlation with worse health status, symptom score and burden of disease, as assessed by the St George’s Respiratory Questionnaire.10 Increased EFL index values at the time of hospital admission for a COPD exacerbation may signal more severe physiological perturbations not detectable by spirometry, since increased EFL has been shown to correlate with longer hospital stays.14

Detection of tidal EFL can also help to identify factors limiting exercise tolerance such as IC, as resting EFL clearly separates two populations of patients with significant differences in exercise tolerance.28,29 Tidal EFL has been shown to correlate with the degree of breathlessness7 and walking distance, and can be used to identify the subgroup of patients with COPD worse clinical outcomes.30 It is also important to assess EFL in clinical practice, as a decrease in index values may relate to improvements in symptoms during recovery from an exacerbation.14 Bronchodilators can improve dynamic airway function, allowing improved lung emptying with each breath, which is associated with improvements in dyspnoea as a result of increased IC and reduction in EELV.2 A significant reduction of dynamic hyperinflation in patients with EFL at rest after bronchodilator administration supports the importance of categorising patients with COPD into subgroups with and without EFL, in order to predict response to bronchodilator therapy.31,32

Overall, EFL could be useful for stratifying patients by the severity of their COPD or treatment responses.4 The recognition and monitoring of EFL before and after exacerbation could potentially be used to guide or titrate treatment, reduce the duration of hospital stays and improve clinical outcomes for patients with COPD.30