Chronic obstructive pulmonary disease (COPD) is a leading cause of death throughout the world and is predicted to become the third leading cause of death by 2030.1 Current treatment aims are to improve lung function, mitigate symptoms and to reduce the frequency and severity of exacerbations.2In recent years, much attention has been directed towards the prevention of acute exacerbations of COPD requiring hospitalization, since these are debilitating, sometimes fatal, and account for up to three-quarters of the cost of COPD.3, 4

The main pharmacological treatment for stable COPD is long-acting bronchodilators, of which there are two classes: long-acting muscarinic antagonists (LAMAs) and long-acting ß2-adrenergic agonists (LABAs). Inhaled corticosteroids (ICSs) are also used in patients with a history of acute exacerbations, but this is only recommended in combination with LABAs.Current clinical guidelines from the Global Initiative for Chronic Obstructive Lung Disease (GOLD) recommend either a LABA plus an ICS or a LAMA as first-line therapy for patients with chronic obstructive pulmonary disease (COPD) who have a risk of exacerbation.2 Advair®,a fixed-dose combination of an ICS (fluticasone) plus a LABA (salmeterol), has been one of the most prescribed treatments for the control of COPD symptoms but the precise role of a combination of a LABA plus a LAMA in fixed doses in the prevention of COPD exacerbations is unclear.

A recent meta-analysis of 23 trials including 27,172 patients concluded that combined LABA/LAMAs are the most effective strategy for improving lung function, symptom scores and health-related quality of life.5 Once-daily delivery of the combined therapy in a single inhaler is also likely to increase compliance.Three combined treatments have currently been approved by the European Medicines Agency (EMA): Ultibro® (indacaterol/glycopyrronium, Novartis), Anoro® (umeclidinium bromide/vilanterol, GlaxoSmithKline) and Duaklir® (aclidinium bromide/formoterol fumarate dehydrate, AstraZeneca).

Until recently, combined LABA/LAMA has not been tested in comparison to the ICS/LABA combination. The results of the FLAME (Effect of Indacaterol Glycopyronium vs Fluticasone Salmeterol on COPD Exacerbations) trial, released earlier this year, have therefore generated considerable excitement. In this 52-week trial, 3360 patients with moderate-to-severe COPD were randomly assigned either to the twice-daily fixed-dose combination of salmeterol and fluticasone or the once-daily fixed combination of indacaterol and glycopyrronium, both on a maintenance basis.Recently released data show that patients who received indacaterol-glycopyrronium experienced 11% fewer acute COPD exacerbations at 1 year compared with patients who received salmeterol-fluticasone,6The indacaterol-glycopyrronium group had a longer time to the first exacerbation than did the salmeterol-fluticasone group (71 days vs. 51 days) representing a 16% lower risk (p<0.001), a lower annual rate of moderate or severe exacerbations and longer time to the first moderate or severe exacerbation.

In another recently published study, AFFIRM COPD (Aclidinium and Formoterol Findings in Respiratory Medicine COPD), 933 patients with moderate-to-severe COPD were randomised to aclidinium/formoterol twice daily or salmeterol/fluticasone twice daily over 24 weeks.Aclidinium/formoterol showed superiority over salmeterol/fluticasone in terms of lung function measured as peak forced expiratory volume (FEV1), with a mean improvement of 93 mL for the LAMA/LABA treatment versus salmeterol/fluticasone. Disappointingly, there was no difference between the two groups in terms of exacerbations and patient-reported outcomes such as dyspnea and quality of life.7

These findings have raised the question of whether all patients receiving a LABA/ICS combination should be switched to a LABA/LAMA agent.8In general, if a patient is doing well on a medication, it is not a good idea to switch to another. However, if a patient is not responding to LABA/ICS, this represents a useful new option. It is risky to change established clinical practice on the basis of a small number of studies. There is a need for more long-term data, as well as studies of patients with severe COPD and coexisting conditions. Nevertheless, the outcomes of the FLAME trial represents another landmark in the management of COPD.8 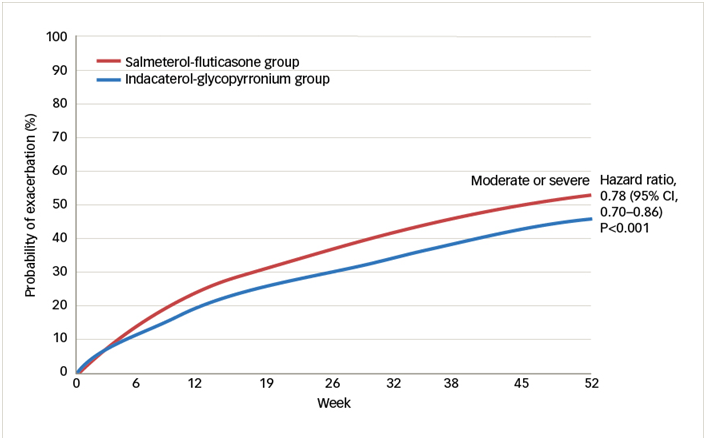