Nichole T Tanner is currently receiving grant funding and consulting fees from Olympus America, Inc. and Cook Inc. Alexander Chen is currently receiving research funding and consulting fees from Olympus America, Inc. Gerard A Silvestri and Nicholas J Pastis are currently receiving grant funding from Olympus America, Inc. Sean P Callahan and Thierry Bacro have no conflict of interest or source funding to declare. The abstract was presented at Advancements in Lung Cancer Diagnostics and Treatment Session; American College of Chest Physicians Chest Annual Meeting 2016; Chest. 2016;150(4_S):979A.
Compliance with Ethics: All procedures were performed under the guidance of the institutional review board of the Medical University of South Carolina (Pro#37817).

The study was supported by a grant from Olympus America, Inc.

Assessment of peripheral pulmonary nodules and mediastinal lymph nodes is critical in the diagnosis and staging of lung cancer, which is the leading cause of cancer death worldwide.1,2 Endobronchial ultrasound (EBUS) continues to evolve, allowing clinicians the ability to evaluate peripheral and central pulmonary lesions as well as various layers of bronchi. Current EBUS bronchoscopes are larger and less maneuverable than a standard bronchoscope, which limits their ability to access certain regions of the lung.

Convex probe endobronchial ultrasound (CP-EBUS) with transbronchial needle aspiration (TBNA) is used to sample mediastinal and hilar lymph nodes and is considered a first-line test for mediastinal staging of lung cancer.3 It is an effective, safe, and minimally invasive procedure, which can also diagnose sarcoidosis and lymphoma.4,5 While CP-EBUS provides access to mediastinal nodes and centrally located pulmonary lesions, it is limited in its ability to sample lesions located more distal to the central airways. A 35° forward oblique direction of view, the diameter of the scope, and the inability to flex the scope at an acute angle make it particularly difficult for the CP-EBUS bronchoscope to navigate into the upper lobes and the narrow right middle lobe (RML) orifice.6 An alternative to the CP-EBUS is radial EBUS (r-EBUS), which can reach the periphery of the lung; however, lack of ‘real-time’ ultrasound during needle puncture is a limiting factor.

These limitations led to the development of the thin CP-EBUS (TCP-EBUS) (OLYMPUS MEDICAL SYSTEMS CORP, Tokyo, Japan) to perform real-time EBUS-TBNA at and around segmental bronchi. The TCP-EBUS scope has a more favorable forward oblique direction of view (20°), a smaller diameter distal tip, and greater range of angulation than traditional CP-EBUS. This technology was previously tested in a porcine model and demonstrated improved accessibility to peripheral bronchi and capability of sampling segmental lymph nodes.7 A recent study assessed the effectiveness of performing both an airway inspection and TBNA of mediastinal, hilar and proximal parenchymal lymph nodes using a similar hybrid thin EBUS model. In this randomized, controlled human trial, a modified CP-EBUS bronchoscope with smaller diameter distal tip, wider angle of flexion and better direction of view, could provide better visualization of lung segments and allow for fewer bronchoscopes when performing a myriad of procedures.8 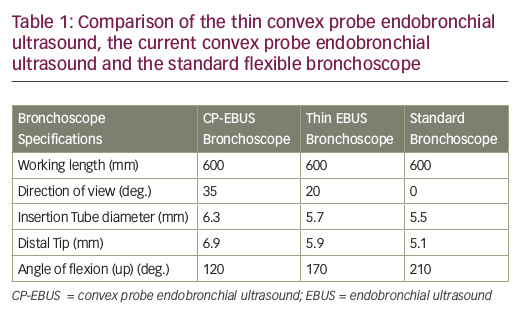 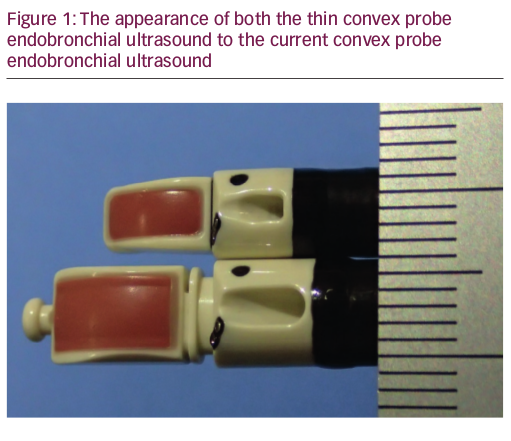 We undertook this study to further evaluate the TCP-EBUS prototype in a cadaveric model to objectively document the endobronchial territory it can access and compare it to that of the current CP-EBUS and standard sized diagnostic flexible bronchoscope.

Two cadavers of differing sizes, one male and female, embalmed with Carolina Perfect Solution® (Carolina Biological Supply Co., Burlington, NC) were secured through the Medical University of South Carolina (MUSC) Center for Anatomical Studies and Education and were used for the purposes of this experiment. Cricothyrotomy with 8 mm endotracheal tube placement was performed on both to access the airways. Bag mask ventilation was then used to re-inflate the lungs. A standard flexible bronchoscope was introduced and therapeutic suction of secretions performed.

A barium polymer was created using 5% (by weight) barium sulfate in powder form added to an aqueous solution of 10% (by weight) bovine skin gelatin (Sigma-Aldrich, St. Louis, MO) and 2% agar (Sigma-Aldrich, St. Louis, MO) and heated to 90°C during mixing and was maintained as a solution at 45–50°C prior to injection. Approximately 3 ml of the polymer was then instilled into cadavers in a third-generation airway using a therapeutic bronchoscope (Olympus BF-1TH190) and Guide Sheath (Olympus K-203). The airways chosen to place the polymer were based on locations that are difficult to reach with conventional CP-EBUS. The barium polymer was placed in the anterior segment of the RUL (RB3) in the male cadaver and lateral basal segment of LLL (LB9), anterior segment of RUL (RB3), medial segment of RML (RB5) and medial basal segment of RLL (RB7) in the female cadaver. The TCP- EBUS bronchoscope was then inserted into the airways and used to observe the lesion endobronchially, as well as assess it via ultrasound if possible. A 22-gauge Olympus Vizishot needle was deployed into the lesion to observe access with EBUS. The purpose of placing the polymer in the airway to was to view it endobronchially. Assessing sample obtained from the polymer was beyond the scope of this study.

The institutional review board at the Medical University of South Carolina approved this study (Pro# 37817). 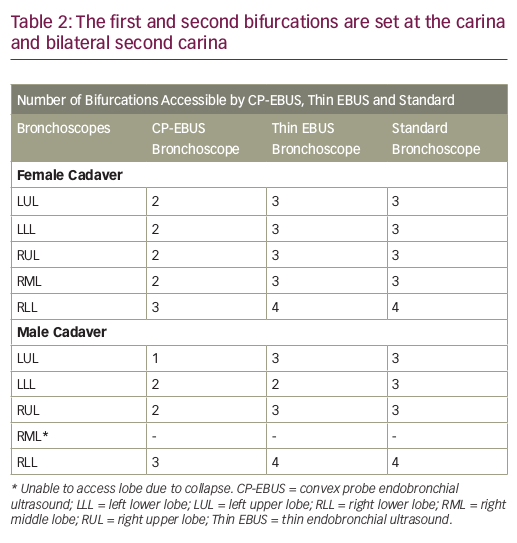 The use of standard bronchoscopy to biopsy pulmonary lesions has a wide range of reported diagnostic yields, depending on the technique, lesion location, or lesion size. The addition of navigational bronchoscopy and r-EBUS may increase diagnostic yield, however, these modalities lack the ability to visualize a target in real-time during biopsy.9,10 CP-EBUS with real-time capability has revolutionized yield for centrally located lymph nodes and pulmonary lesions.3 To extend real-time sampling capability to the periphery of the lung has the potential to increase diagnostic yield in bronchoscopy. This study extends the work previously performed in a porcine model by showing the extended reach in cadaver subjects with a view both endoscopically and by fluoroscopy.7 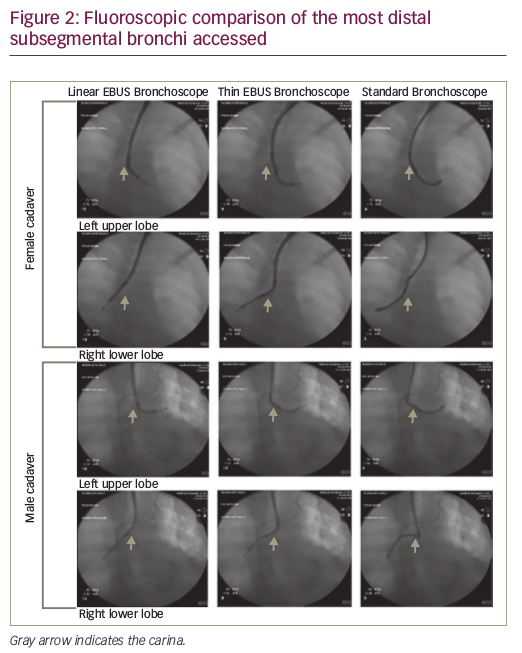 In the evaluation of pulmonary lesions suspected to be cancer, the American College of Chest Physicians (ACCP) guidelines recommend choosing a diagnostic modality based on the size, location, procedure risk, and available expertise.1 Historically, the sensitivity for standard bronchoscopy for diagnosing peripheral pulmonary lesions has been low at 34% and 63%, for lesions <2 cm or >2 cm in diameter, respectively.11 In contrast, computed tomography-guided transthoracic needle biopsy has a relatively high sensitivity at 90%.11

The use of guided bronchoscopy for diagnosis has become more appealing than standard bronchoscopy by offering promising techniques such as r-EBUS, virtual bronchoscopy software, and electromagnetic navigation (EMN). A meta-analysis of guided bronchoscopy for the evaluation of pulmonary nodules demonstrated a diagnostic yield of 70%.9 More recently, however, a publication from the ACCP Quality Improvement Registry, Evaluation and Education Program (AQuIRE) reviewed 581 consecutive patients at 15 centers undergoing transbronchial biopsy (TBBx) for peripheral lesions and found an overall diagnostic yield of 53.7%.10 In that study, the diagnostic yield of standard bronchoscopy alone was 63.7%, while the yield of r-EBUS, EMN, and EMN plus r-EBUS were lower (57%, 38.5%, and 47.1%, respectively).10 A reason for the lower yield by the guided techniques may be related to case selection with more difficult cases being attempted by these techniques. In addition, a study evaluating a genomic classifier to predict malignancy in nodules and masses found the overall diagnostic yield of bronchoscopy was only 47%.12 These findings suggest that current bronchoscopic techniques are not performing as well as necessary to diagnose pulmonary pathology.

CP-EBUS has the benefit of real-time sampling of lymph nodes and centrally located pulmonary lesions. The sensitivity of CP-EBUS is consistently high at 89% for mediastinal sampling and is recommended as the first diagnostic and staging test in suspected lung cancer.3 However, the technology is limited by its inability to reach more distal lesions (outside the central airways) due to its size and difficulty accessing upper lobe regions. While r-EBUS can access distal airways, the inability to biopsy in real-time and decreased performance on central lesions limits this technology. The TCP-EBUS represents a hybrid technology, which may overcome the limitations of both EBUS technologies, and may limit the number of bronchoscopes needed by sampling the mediastinum, and if necessary, the primary tumor in one setting, The ability to combine these techniques has been shown to decrease the overall number of procedures patients undergo during the work-up of a pulmonary nodule.8 The ability to access additional generations of airways may allow real time biopsy to be extended beyond the central airways and to potentially improve diagnostic yield of pulmonary nodules and masses. Although this technology appears to provide access to areas out of reach of conventional EBUS bronchoscope, it will not reach the most peripheral of pulmonary lesions that can be accessed via radial or EMN. However, this technology is an important step toward the development of an even thinner CP-EBUS bronchoscope that will extend further to the periphery. 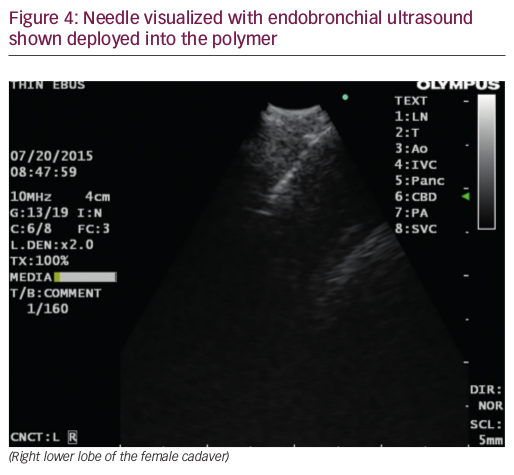 This study has several limitations. First, the cadavers were fixed in an embalming solution and obviously rigor had set in which likely limited the extent to which any of the bronchoscopes could be passed to the periphery. More accurate measurements from the central airways may be accomplished once the bronchoscope is trialed in patients. It is unclear from this study how close to the pleural surface this technology can reach. Second, the bronchoscopists were not blinded to the location of the implanted polymer so that any assumptions regarding clinical utility are limited.

The TCP-EBUS bronchoscope can extend further into the distal airways than the traditional CP-EBUS bronchoscope with a reach similar to a standard bronchoscope. This technology has the potential to bring real-time biopsy capability to areas of the lung that currently cannot be reached by standard CP-EBUS. The goal being that if distal lesions can be biopsied in real time, then the yield of bronchoscopy should be substantially improved. Further evaluation in patients with pulmonary nodules and masses is warranted.