Halil Yarnadag, Cuneyt Tetikkurt, Muammer Bilir and Sabriye Demirci have nothing to declare in relation to this article. No funding was received for the publication of this article.
Compliance with Ethics: The study has been approved by the institutional review board/ethics committee of Cerrahpasa Medical Faculty and each patient had provided informed, written consent. Patients fulfilled the American Thoracic Society (ATS)/European Respiratory Society (ERS) criteria for sarcoidosis. All procedures were followed in accordance with the responsible committee on human experimentation and with the Helsinki Declaration of 1975 and subsequent revisions.

This article is published under the Creative Commons Attribution Noncommercial License, which permits any non-commercial use, distribution, adaptation and reproduction provided the original author(s) and source are given appropriate credit

Sarcoidosis is a chronic systemic disease of unknown origin that is characterised by the formation of non-caseating granulomas in the affected organs, predominantly in the lungs and the intrathoracic lymph nodes.1–3 Non-caseating granulomas most often appear in the lungs and lymph nodes, but virtually any organ can be affected. Sarcoidosis of the gastrointestinal tract is extremely rare. In contrast to these organs, liver follows lung and lymph nodes in the frequency of involvement. About 50–79% of liver sarcoidosis is diagnosed by biopsy, while 67–70% is identified by autopsy.4–7 Although liver involvement is frequent in sarcoidosis patients, data relevant to the clinical characteristics and prognosis of such patients are scarce.

The aim of our study was to investigate the clinical features of liver sarcoidosis. Another objective of our study was to assess the significance of liver disease in regard to prognosis and extra-pulmonary organ involvement. Therefore, we undertook a retrospective study in patients with sarcoidosis to characterise the clinical aspects and outcome of limited and diffuse liver disease.

Spirometry was performed according to the ATS/ERS recommendations. DLCO/VA was measured with the single-breath technique and was adjusted for alveolar ventilation. The pulmonary function tests and DLCO/VA were interpreted in accordance with the guidelines of ATS.9 Values for the pulmonary function tests and DLCO/VA were considered abnormal if they fell outside the 95% confidence interval for the predicted values. The evidence of restrictive (reduced total lung capacity [TLC] or forced vital capacity [FVC] and normal or high forced expiratory volume in one second [FEV1]), or decreased diffusion capacity (DLCO/VA<80%) were considered abnormal. For evidence of skin and ocular sarcoidosis, all patients were screened by a dermatologist and an opthalmologist. Central nervous system involvement was considered to exist if neurological findings were positive, a lesion was confirmed by CT or magnetic resonance imaging (MRI) and diagnosed by a consultant neurologist.

The medical records were used to obtain data about patient age, sex, radiological stage, laboratory, pulmonary function tests, FOB and histopathological findings. Sputum, bronchoalveolar lavage (BAL) culture was done to exclude infection. FOB was performed under local anaesthesia in all patients. Transbronchial and bronchial biopsies were taken. Liver biopsy was performed in case of radiological involvement demonstrated by ultrasound and/or CT. The biopsy was considered positive if it revealed non-caseating granulomas without mycobacterial or fungal organisms. Liver involvement was identified by the presence of a positive pathology and/or elevated liver function tests. The patients were classified into three groups:

Scale variables were represented by mean ± standard deviation. Clinical findings and prognosis of patients with limited and diffuse liver involvement were compared to patients without liver disease. The χ2 test was used for categorical variables as appropriate. Logistic regression was applied to determine the effect of age, gender and hepatic involvement on prognosis. Kruskal–Wallis and Bonferroni corrected two-way Mann–Whitney tests were used for comparison of the groups. After checking for normality, analysis of variance (ANOVA) was done to compare the difference between serum ACE, serum calcium, 24-hour urinary calcium, pulmonary function and DLCO/VA of the three groups. All tests were two-tailed and a p-value lower than 0.05 was accepted for statistical significance. Analyses were done using software (SPSS 22.0 version).

Medical records of 271 sarcoidosis patients were evaluated. Initially, patients with suspected hepatic sarcoidosis were determined. Of these, 81 cases revealed granulomas by liver biopsy and 43 cases had hepatomegaly with increased levels of liver function tests (serum glutamic pyruvic transaminase [SGPT], serum glutamic oxaloacetic transaminase [SGOT], alkaline phosphatase [AP] and gamma-glutamyl transpeptidase [GGT]). Histopathological examination of the liver biopsy was positive and revealed non-caseating granulomatous inflammation in the biopsy proven cases. Table 1 shows the demographic composition of the patients. Smear or culture of bronchial lavage was negative for bacteria, mycobacteria and fungus in all of the patients. Histopathological findings of liver involvement in patients with hepatic sarcoidosis are shown in Table 2. Epithelioid histiocytes, Langhanstype giant cell and lymphocytes were observed most frequently in the granulomas. Histopathological evaluation of cases revealed the rate of focal fibrinoid necrosis to be 36%. Diagnostic tissue for sarcoidosis was obtained during FOB in 80%, in 28% by skin biopsy, in 18% via mediastinoscopy and in 16% by various organ biopsies. None of the patients had a complication associated with the biopsy procedures.

Clinical characteristics of the patients are shown in Table 1. FEV1, FVC, TLC and DLCO/VA were not significantly different between the three groups. Liver involvement cases were distributed as 12 cases (9.6%) in stage 0; 28 cases (22.5%) in stage I; 60 cases (48.3%) in stage II; and 24 cases (19.3%) in stage III. Results of the liver function tests are shown in Table 1. Initially, 142 patients (52.4%) with suspected hepatic involvement were determined; 81 cases were diagnosed with characteristic granulomas by liver biopsy while 43 subjects had elevated liver function tests and 18 patients had both hepatomegaly and high liver function test values with normal liver biopsies. Among the liver function investigations, SGOT and SGPT were the most frequent abnormal tests, followed by GGT and AP. Hypercalcaemia was observed only in four patients with liver disease (4/124, 3.2%) and serum calcium levels were 10.8, 11.2, 11.8 and 12.4 mg/dl (normal limit value: 8.5–10.5 mg/dl), respectively. Nine patients without liver involvement (9/147, 6.1%) had serum calcium levels above the normal range. Extra-pulmonary organ involvement (three or more) rate was 16.4, 20.6 and 34.8% in patients with NLI, LLI, and DLI, respectively. 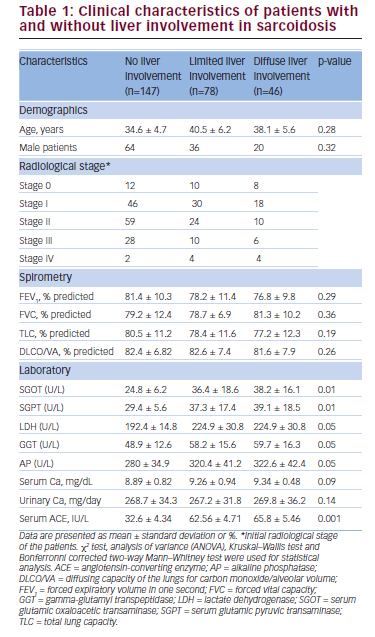 Discussion
Sarcoidosis affecting the liver can cause significant morbidity. The incidence of hepatic sarcoidosis is underestimated because other clinical manifestations, especially pulmonary, skin or eye symptoms, tend to dominate the clinical picture. In addition, the symptoms are often nonspecific and are therefore not attributed to hepatic involvement, 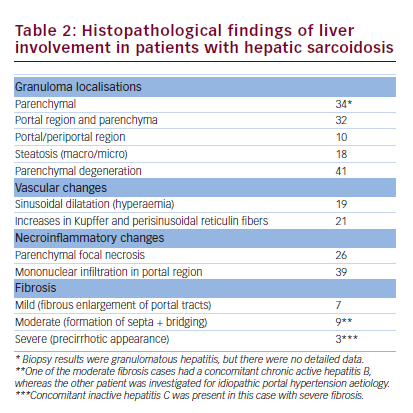 Hypercalcaemia is reported to be present in approximately 27% of the patients with sarcoidosis, with a range of 2–63%. Depending on the published studies, nearly 27% (range: 2–63%) of the sarcoidosis patients have hypercalcaemia. The main cause in the difference of the incidence of hypercalcaemia may be an ondulating course of sarcoidosis, so that the high levels may be missed clinically when serum calcium is not measured or when the patients are in remission. Hypercalcaemia in sarcoidosis is due to the uncontrolled synthesis of 1,25-dihydroxyvitamin D3 by macrophages. 1,25-dihydroxyvitamin D3 leads to an increased absorption of calcium from the intestine and resorption of the bone. The extremely low incidence of hypercalcaemia in our patients may be related to the decrease in 25-alpha-hydroxylase activity in hepatocytes caused by the hepatic involvement in these patients.11–15

In the current study, the granulomas were located most commonly at the periportal area. This finding is compatible with the literature. Epithelioid histiocytes, Langhans-type giant cell and lymphocytes were observed frequently in the granulomas. Focal fibrinoid necrosis rate was 36% in our cases. Although definite cause of fibrosis is unknown in sarcoidosis cases, it is suggested that sarcoid granulomas may cause fibrinoid changes while healing. This condition supports that the sarcoid granulomas form fibrotic tissue while healing. Fibrosis is probably formed by the effects of released cytokines, but factors leading to fibrosis are currently unknown. Although there are few reports of hepatoma in cases with sarcoidosis,5,16–19the absence of extensive fibrosis and regenerative nodules in addition to benign liver pathologies such as adenomas suggests that liver sarcoidosis is weakly associated with malignancy, as is the case in our patients.5,16,17

We are aware of the limitations of our study. This is a retrospective study with a small sample size. Further prospective studies including more patients with histopathologically diagnosed liver biopsy samples may be needed to define the limited and diffuse hepatic sarcoidosis more precisely, thereby enlightening the clinical features and the prognosis of these patients. The follow-up interval may be considered short, but it is well known that most of the prognostic risk factors for progressive disease become apparent within two years of diagnosis; follow up was approximately 10 years in our patients.20–22 Furthermore, although the clinicians were very experienced, the biopsy samples may be inadequate, may not represent the disease site and therefore may not identify the non-caseating granulomas.

Diffuse liver involvement in sarcoidosis appears to be a significant factor for progressive disease. The severe prognosis is probably associated with the high granuloma burden in patients with diffuse disease. This finding is also supported by the raised levels of serum ACE levels, reflecting the high granuloma burden in these two groups of patients with limited and diffuse disease. Our results emphasise the significance of identifying diffuse hepatic involvement in regard to prognosis and a progressive disease. Positive liver biopsy and radiological investigations for the diagnosis of limited or diffuse liver involvement may be useful to predict the prognosis. The incidence of severe extrapulmonary is also significantly higher in these patients contributing to the worse prognosis. This finding is unique because previous studies have not reported that diffuse liver involvement would be associated with a progressive disease and a more severe extrapulmonary organ involvement. Clinicians should be aware that diffuse hepatic involvement may indicate a worse prognosis.