Primary ciliary dyskinesia (PCD) is an autosomal recessive disease characterised by dysfunction of ciliary motility associated with impaired mucociliary clearance. Kartagener syndrome, by definition, is a triad of situs inversus, bronchiectasis and chronic sinusitis, and is a subdivision of PCD. It can cause abnormal sperm motility and infertility in men, and can also cause infertility in women because of impaired cilia motility in fallopian tubes. In this case report, a 31-year-old male, non-smoker, born to non-consanguineous parents, presented to the emergency department with severe breathlessness and chest pain. He had a bad cough with yellow sputum. High-resolution computerised tomography showed bronchiectasis, and ultrasonography showed dextrocardia without situs inversus. He was treated with imipenem and amikacin according to sputum culture for 2 weeks, and then he was discharged on inhaled tobramycin. The distinctive aspect of this case, is that not only was this the first time this patient had been diagnosed with Kartagener syndrome, but he is also fertile (he had fathered two children), which is considered rare, but not impossible, in such cases. Fertility, as this case shows, does not therefore exclude Kartagener syndrome, and clinicians must suspect it in every case of dextrocardia, chronic sinusitis and bronchiectasis, because misleading the diagnosis can developed poor prognosis.

Primary ciliary dyskinesia (PCD) is an autosomal recessive disease characterised by dysfunction of ciliary motility associated with impaired mucociliary clearance.1 Kartagener syndrome is characterised by the triad of: sinusitis, bronchiectasis and situs inversus.2,3 Situs inversus is a condition whereby the visceral organs are completely, or partially, arranged in a mirror-image reversal of their normal positions.7 The percentage of patients with PCD that exhibit situs inversus varies, but in general, it is around 50–70%.4–6 Infertility is common in men with Kartagener because of impairment of sperm motility.

A 31-year-old male, non-smoker, born to non-consanguineous parents, presented to the emergency department with severe breathlessness and chest pain. He had a bad cough with yellow sputum for 7 days prior. He was treated with cephalosporins without any benefit. He also reported episodes of headache and recurrent cough, which had been persistent for up to 1 year. The patient married 12 years ago and has two children. The first one was born 8 years ago (after 4 years of marriage), and the second 5 years ago. He has had no further children.

Upon examination, the patient displayed reflexes of a conscious and oriented person. His blood pressure was 110/70 mmHg, heart rate was 108 beats/minute, and respiratory rate was 22 breaths/minute. Oximetry on admission was 84% and temperature was 38°C. The patient had a cough with purulent sputum but no haemoptysis. Clubbing was seen in both hands (Figure 1). The patient also presented with auscultation of chest reflexes, wheezing and bilateral coarse crackles, which were heard more clearly on the right side. Auscultation of heart sounds revealed an apex beat heard on the right side. 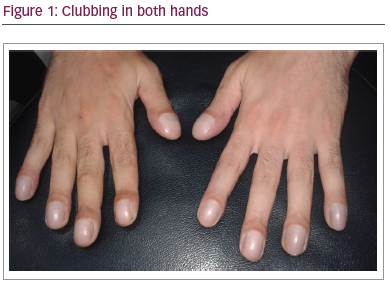 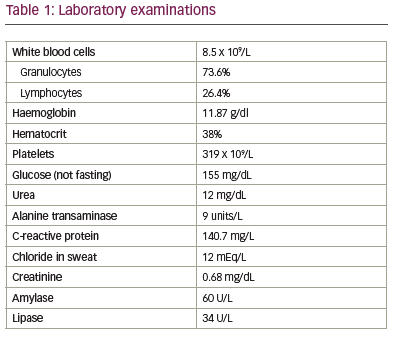 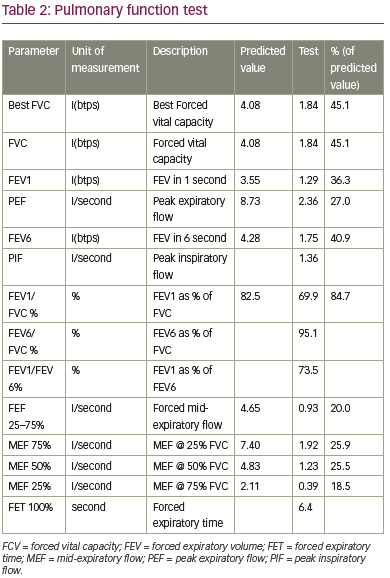 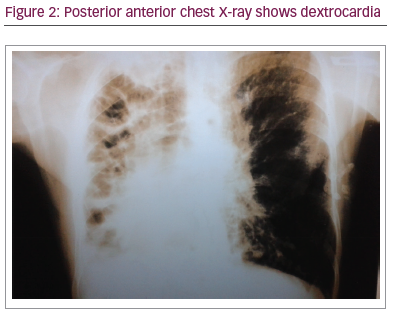 A computed tomography (CT) scan was then performed and revealed bronchiectasis (Figure 3), meaning the patient was at an increased risk of developing tuberculosis; therefore, we recommended that the patient attended the respiratory clinic for further follow-up. Unfortunately, even after treatment, the patient developed ground-glass opacity on CT, and the lesion was doubled (Figure 4). 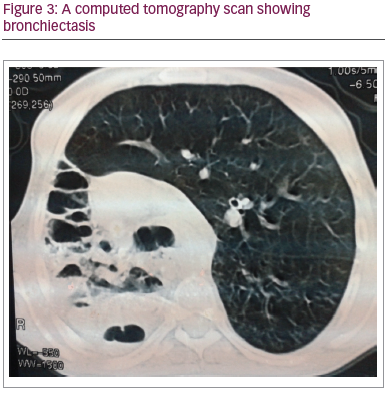 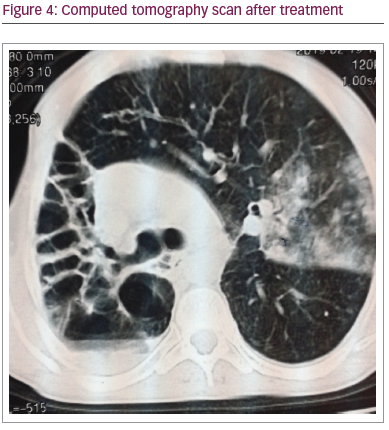 Ultrasonography was performed and showed no situs inversus totally. A semen analysis showed 75 million spermatozoa with 80% motility; however, the patient mentioned that the count was only 9 million 3 months ago. Sputum for acid-fast bacilli (AFB) staining (three times) was negative for Mycobacterium tuberculosis. Sputum was positive for an isolate of Citrobacter spp., which was resistant to cefotaxime, lincomycin, rifampicin, gentamycin and nitrofurantoin. This could explain why the patient did not benefit from treatment with cephalosporin. The sputum culture was, however, sensitive to imipenem and amikacin. The patient was diagnosed with Kartagener syndrome and was treated with imipenem for 2 weeks. His clinical state improved and he was discharged with treatment with inhaled tobramycin (300 mg twice daily) in two cycles (28 days on/28 days off cycle), before re-evaluating response.

The patient described in this case report presented to the emergency department with acute breathlessness and he reported episodes of headaches for up to 1 year. He was subsequently diagnosed with Kartagener syndrome. Bronchiectasis is common and is seen in about 25% of all cases in Kartagener syndrome patients , and it is associated with chronic sinusitis.8

Diagnostic procedures for PCD, which confirm the impaired cilia motility, depend on the biopsy of nasal mucosa and laparoscopic biopsies of tubal mucosa; these are complex and not available in Syria, so the diagnosis of this case was clinically and supported by radiological images. The diagnosis of Kartagener syndrome is usually made in childhood; however, some cases are delayed to the third decade or later, especially in cases where the patient is fertile and asymptomatic.9,10 The patient described here had not previously been diagnosed with Kartagener, had never undergone high-resolution CT.

As Kartagener syndrome is a form of PCD, the motility of cilia will be affected by this disease, and as a result, infertility is not uncommon in patients with PCD. About 50% of male patients with PCD are infertile due to lack of sperm motility.11 The patient in this case has two children and his semen analysis reported normal motility (45 million sperm with 80% motility). Though it is worth noting that most infertile patients with Kartagener syndrome have a normal spermatozoid count, but with a structural defect and a lack of motility,12 which is a result of the genetic causes linked to PCD. Disorders of cilia motility may be congenital or acquired. Up to 6.3% of patients with PCD have heterotaxy, and most of those have cardiovascular abnormalities;13 one such abnormality which was reported in our patient was dextrocardia. Patients with situs abnormalities have more ciliary outer dynein arm defects and fewer inner dynein arm defects, in addition to central apparatus defects and more mutations in ciliary outer dynein arm genes (DNAI1 and DNAH5).14,15 To date, pathogenic variants in DNAH1, SEPT12, SLC26A8, CATSPER1, CATSPER2 and ADCY10 have been reported to cause non-syndromic asthenozoospermia, and DNAI1, DNAH5, DNAAF2, CCDC39, DYC1X1 and LRRC6 have been implicated in primary ciliary dyskinesia and syndromic asthenozoospermia.16 The case we have presented here supports the syndromic asthenozoospermia.

Infertility in male patients with Kartagener syndrome is due to the lake of sperm motility, while in females it is due to defective ovum transport because of dyskinetic motion of oviductal cilia.17 Prognosis in these patients is poor in general, even with treatment. The patient in our case will require comprehensive follow-up, as he is at increased risk of tuberculosis. Tuberculosis is common complication in patients with lower lobe bronchiectasis.18,19 Sputum AFB staining in the present case was negative for Mycobacterium tuberculosis; however, there remains a high risk of developing tuberculosis. At this stage, surgery would not improve this patient because bronchiectiasis is present in both lungs, and if surgery was chosen, both lungs would need to be transplanted, which is not possible in Syria, and recurrent infections should be controlled by antibiotics.20 There have been reports that support the use of sinus surgery in such patients, but this is an area where further investigation is required.21–23

Kartagener syndrome is a form of PCD that physicians should be aware of. It must be suspected in every patient presents with chronic sinusitis, bronchiectasis and dextrocardia, even if there is complete situs inversus or not. Infertility is common in such patients; however, the fertility of the patient in this case did not exclude the diagnosis of PCD. It is important to conduct a CT scan for every patient with dextrocardia. Finally, treatment of recurrent respiratory infections with antibiotics is the basis for controlling the disease, and surgery for sinusitis may be good last resort.

Fatima Alhamed Alduihi has nothing to declare in relation to this article.

Compliance with Ethics: All procedures were followed in accordance with the responsible committee on human experimentation and with the Helsinki Declaration of 1975 and subsequent revisions. A written consent form has been obtained from the patient and he gives his consent for his images and other clinical information to be reported in the journal.

The author would like to acknowledge the help rendered by Dr Abdullah Khoury, Professor of Internal Medicine and Consultant in Pulmonary Medicine in Aleppo University Hospital for his constant encouragement and support in preparation of this manuscript. 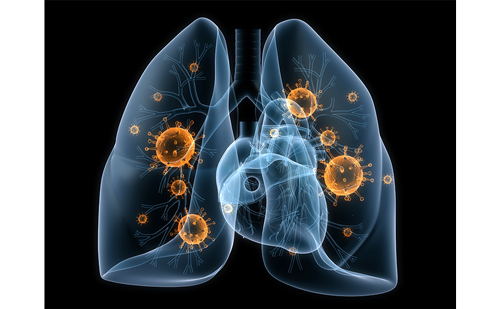 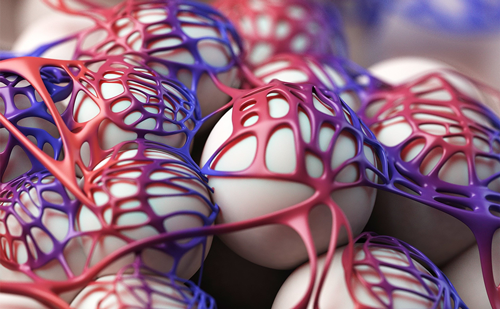